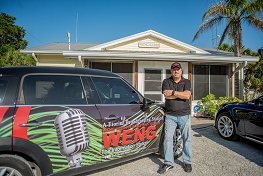 THE WAVE 1530 AM signed on the air in the late summer of 1964 and was continuously owned and operated by Sarasota Charlotte Broadcasting Corporation until August 27, 1993. On that date, the Federal Communications Commission approved transfer of ownership of WENG Radio to The Murray Broadcasting Company. The Murray Broadcasting Company has completely renovated the studios and offices, installing state-of-the-art equipment and computer, digital sound technology. This has been integrated into it’s new lineup of News, Talk, and Sports.